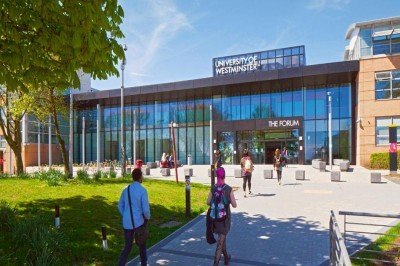 The University of Westminster is a reputable London-based school in England. Among the former students of the school, the first names that come to mind are; Roger Waters, co-founder of Pink Floyd; fashion designer Vivienne Westwood, Blueberry CEO Christopher Bailey.

The history of the University of Westminster dates back to 1838. Founded as a School of Arts and Sciences by the British engineer and aeronautics expert Sir George Cayley, it took until 1992 for the school to officially acquire the title of a modern university.

However, it has the distinction of being the first school to provide education in Arts and Science Schools in England.

One of the most critical current partnerships of the university is that it operates as an official school in the United Nations Habitat project.

The university's main campuses are located in central London. For those who choose Westminster to study in the UK, the school’s location is a great opportunity. Because by looking at the campuses in the heart of England, adapting to the country becomes fast and fun. While making plans for the future, the opportunity to be employed in a world-famous metropolis and the chance to start working in companies that shape the world economy, starting from the internship level, increase the value of the education received at Westminster University.

Life at University of Westminster

London is a city where tradition embraces development. Westminster University also offers a prosperous social life as it is a London-based school.

Westminster University, which offers students the opportunity to use one of the world's most famous capitals as a school campus, is located at a point that can be described as the city’s heart. World-famous historical and tourist places such as Big Ben, London Eye, Tower of London are within walking distance of the school. Shopping malls, street shops, cafeterias, restaurants, fast-food and entertainment venues, and even stadiums belonging to the world's big clubs are within walking or public transportation distance for those who are interested in football matches.

Consisting of 4 main campuses, 3 of Westminster University campuses are located in the heart of London. (Cavendish, Marylebone, and Regent Street). The other campus is in the North West London (Harrow) area.

The university has built beneficial social facilities for students with millions of pounds invested in its campuses. It is possible to organize many social activities, from sports activities to shopping, from art events to student meetings, at Westminster campuses.

There is a unit established to help students who are enrolled in the university with their accommodation problems. Various dormitories/accommodations within the school cater to different needs. Accommodation facilities belonging to the school, which are close to the campus campuses, are very advantageous in terms of location as they are in the center of London.

Four different dormitory campuses in Wembley Park, Harrow, Hoxton, and Marylebone are ready for students to use with varying types of room. In addition, those who want to benefit from the numerous accommodation opportunities of a metropolis like London are given a chance to get support from the relevant units of the school. Staying in a city and university environment that hosts different cultures offers opportunities to change the way students view the world.

University of Westminster provides education under the roof of three main faculties for students who want to study in the UK. Continuing to provide undergraduate and postgraduate education in dozens of different departments, the university has achieved world university education standards in almost every department.

College of Liberal Arts and Sciences £12,000

The sections listed above are divided into different branches among themselves. One of the most ambitious departments of the University of Westminster is the Faculty of Social Sciences department.

In addition, the University of Westminster provides education in the same faculties for international students who want to do a master's degree in England. The fee for master’s programs is £15,000.

Being the 1st most preferred location globally, England is home to the oldest, well-established, prestigious, and quality universities that students can attend.

Because England is a multicultural residential area, the lifestyle of each city is different. Student life can be very different for students in other parts of the UK. Your experience depends on the university you attend, what part of the UK you are in and what you do. Student life can be fascinating and educational.

Universities in the UK have dormitories. Students can stay in these dormitories according to their convenience and preferences. Also, the most common type of accommodation in the UK is homestay.

Since England is a multicultural residential area, the lifestyle of each city differs from the other. Student life can be very different for students in different regions of the UK.