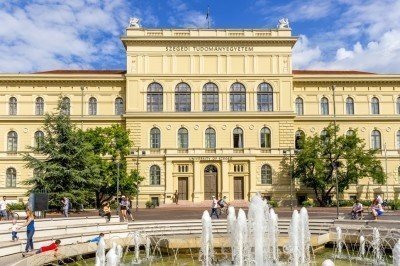 Dating back to 1581, the University of Szeged is located in Hungary's sunniest city, which attracts thousands of young people for its vibrant, urban student life, colorful festivals and safe environment.

Hungary also has EU accreditation as it is a member of the European Higher Education Area. According to the QS World University Rankings, SZTE was the best Hungarian university in 2021.

Distinguished professors worked at the university, including Nobel laureate Albert Szent-Györgyi, who was the first to isolate vitamin C and extract it from Szeged paprika,

It is a research university of outstanding achievements, covering 700 research areas in 19 Doctoral Schools and more than 60 full-time undergraduate programs for international students. Scholarships such as the Stipendium Hungaricum Scholarship Program and the SZTE START Scholarship help students from various parts of the world attend the University.

The student body of the university, whose number of international students was approximately 4100, has also reached 21000.

The University of Szeged, the top university in Hungary, offers programs in English for students. According to the QS World Rankings, the world's most prestigious international university rankings, the university, which is among the top 500, is one of the best options for studying abroad.

Having all of the above titles, the university also ranks high in the Shanghai rankings, URAP and CWTS Leiden rankings.

Szeged is a very well-structured city in the south of Hungary, which receives more sun and has a warmer climate than other cities. The city, which has earned the title of "City of Sunshine" with approximately 2000 hours of sunshine per year, is surrounded by the Tisza river.

Szeged, the 3rd largest city of Hungary, remained under Ottoman rule for 123 years between 1543 and 1686. Szeged, which has hosted many cultures and been under the rule of different countries, is one of the most beautiful cities in Europe with its architecture. The city, which is very famous for paprika, salami and fish soup, hosts hundreds of thousands of visitors every year by hosting the Szeged festival, one of the most famous festivals in Hungary.

Szeged is one of the best university cities for students who want to study in a quiet and peaceful city with a population of around 160 thousand. Tram and bus transportation in the city is very easy. Many students can easily reach their desired destination by bicycle.

Since the University of Szeged is located in the city center and the faculties are very close to each other, there is almost no transportation problem in the city.

The first programs in the minds of students considering university education and consultancy services in Hungary are usually fields such as medicine, dentistry, social sciences, business and commerce. Another important and in demand program is Economics. Like most Hungarian public universities, the University of Szeged offers a large number of programs. Undergraduate students who want to study in English can choose the University of Szeged with peace of mind for programs such as medicine, dentistry, pharmacy, business, economics and English linguistics.

Business and Economics: The University of Szeged operates a fully accredited and global program for Business and Economics. The program is referred to as International Economics and Business. It has many values ​​that make it different among Hungarian universities. It is also very suitable for the price. Annual business and economics tuition fees are 4,400€ for undergraduate and 5,000€ for masters. 200 € exam fee is also required. An important condition for admission to the department is IELTS 5.0 and above, and another is to pass the school's mathematics exam. The University of Szeged is one of the best universities in this field throughout central Europe, including in countries such as Poland, Czech Republic, Germany.

English and American Language: Linguistics, an academically in demand field, is taught at a high quality by a highly valued academic staff at the University of Szeged. The annual fee for the English Studies program is 3,000€, and the exam and application fee is 250€. It is an ideal program for international students who want to study intensive English in their undergraduate programs.

Medicine and Dentistry Programs: Medicine departments are one of the most researched areas by students who want to study at university in Hungary. It provides better conditions than many alternatives offered by Europe and the United States. As a result of a 6-year medical education, it is possible to practice medicine anywhere within the borders of the European Union. There is an entrance exam to study medicine at the University of Szeged, the entrance exam is administered in Europe. Dentistry, another important medical department, accepts students with this exam.

In Szeged, which is also a cheap city for meals, restaurants are prepared for many students. Traditional Hungarian dishes and fast food restaurants abound here. While an average meal is between 3-5 Euros, cooking at home can cost 2-3 Euros per person.

For three decades, the University of Szeged has offered international study programs in various languages. SZTE offers international undergraduate programs at the Bachelor's, Master's and Doctorate levels, as well as other preparatory programs in English and Hungarian.